Battle of the Cedars Fortress Rosecrans 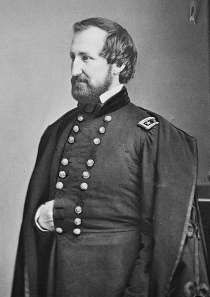 Confederate Gen. John Bell Hood planned the destruction of the Union army supply depot at Murfreesboro to hurt Union logistics. A combined action by Forrest and Bate failed and left Hood without support in his loss at Nashville.

During his campaign against Nashville in late 1864, Confederate Gen. John Bell Hood planned the destruction of the Union army supply depot at Murfreesboro to hurt Union logistics. On December 4, Hood ordered Maj. Gen. Nathan Bedford Forrest to attack blockhouses along the railroad to Murfreesboro, then destroy Fortress Rosecrans, the Union supply depot there. William Bate's detached division attacked Blockhouse No. 7, which protected the railroad crossing at Overall Creek, but Union forces fought them off. Forrest, after destroying some blockhouses in La Vergne, joined with Bate's division, and the combined command advanced on Murfreesboro along two roads, driving Union forces before them into Fortress Rosecrans. Early on the morning of December 6, Forrest ordered Bate's division to "move upon the enemy’s works." Confederate troops surged forward, but were checked by heavy fire, and fighting tapered off during the day as the Confederates regrouped. Forrest fortuitously received reinforcements, and decided to renew the assault the following day. On the morning of December 7, Maj. Gen. Lovell Rousseau, overall commander of Union forces at Murfreesboro, sent two brigades out under Brig. Gen. Robert H. Milroy to the Salem Pike where they collided with the Confederate line. Unfortunately for Forrest, some of Bate’s men broke and ran, and not even threats from the generals could stop them. This shameful conduct caused a general retreat by the rest of Forrest’s command, which halted several miles outside Murfreesboro for the night. While Forrest had destroyed railroad track and several blockhouses during his brief campaign, he had accomplished little else and, more importantly from an operational standpoint, was absent at the Battle of Nashville. He and his troops joined Hood’s retreat following the overwhelming Union victory at Nashville.