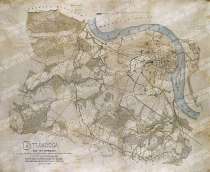 Nearly 25 years in the making, the Chattanooga History Center began in 1978 as a grassroots effort to preserve the city's artifacts. Originally named the Chattanooga Regional History Museum, the museum was first located in the former Missionary Ridge Elementary School. It later relocated to the corner of Fourth and Chestnut Streets. In 2000, the museum expanded into an adjacent building at 401 Broad Street donated by the City of Chattanooga. The museum's name was formally changed to the Chattanooga History Center in 2006 and moved to its new location at 2 West Aquarium Way on the Aquarium Plaza in 2011. Here, planning and design of the new Center continue along with its programs and its service to the public as a research resource.

Scheduled to open in the fall of 2013, the new Chattanooga History Center will provide a fresh approach of connecting visitors to Chattanooga's past. As a progressive social history museum, the Center's compelling exhibits will combine analysis of the past with lessons for civic action. By presenting history as an experience in time—shaped by people making decisions specific to their own moment—the Chattanooga History Center will provide its visitors with tools for shaping the future of their own communities.