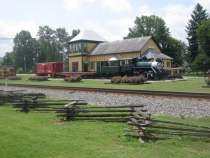 In Cowan, Bragg briefly considered forming a line of battle through the small town to engage the Federals, but chose instead to use the railroad to retreat toward Chattanooga. Upon arrival in Cowan, Federal General Philip Sheridan found the place abandoned.

After the Battle of Stones River near Murfreesboro, Tennessee, in the first couple of days of 1863, Confederate General Braxton Bragg retreated his force South to the Tullahoma and Shelbyville area. Federal commander General William S. Rosecrans, determined to cut Bragg's supply line by isolating him from the Nashville and Chattanooga Railroad, advanced toward Bragg over the course of several days beginning on June 23. By June 27, Federal troops had taken up a position at Manchester in the Confederate rear, forcing Bragg to retreat to Tullahoma. Rosecrans' subsequent advances caused Bragg to abandon Tullahoma on July 1 and continue the retreat South through Decherd and Cowan. While in Cowan, at the urging of his lieutenants, Bragg briefly pondered forming a line of battle right through the small town to engage the Federals. Upon arrival in Cowan, Federal General Philip Sheridan found the place abandoned, Bragg having opted to retreat further South toward Chattanooga. The last of Bragg's troops caught railroad cars just hours before Sheridan arrived. Bragg's retreat set the stage for the important battles in and around Chattanooga in the fall of 1863. Admission to the museum is free. The 1904 depot houses exhibits interpreting the relationship between Cowan and the railroad.