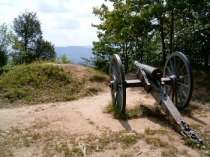 On August 27, 1862, the fort failed its mightiest test when an artillery attack by Gen. Samuel B. Maxey forced Federal troops to abandon it.

Constructed in 1862 shortly after the Battle of Shiloh, this Federal fort had three different names during the Civil War: Fort McCook and Fort Thomas when Federal forces occupied it and Fort Maxey during a stint under Confederate control. Named for Gen. Alexander McCook, the fort's remnants are located near the confluence of the Tennessee River and Battle Creek northeast of the town of South Pittsburg, Tennessee. On August 27, 1862, the fort failed its mightiest test when an artillery attack by Gen. Samuel B. Maxey forced Federal troops to abandon it. Of the lost engagement, Col. Leonard A Harris of the Second Ohio Infantry reports, "the enemy put a battery of four guns, one a siege gun, in position on the opposite bank of the Tennessee River, about 800 yards from the fort. They opened on the fort and camp and shelled it without intermission, except to allow their guns to cool, for twelve hours." The fort and Marion County were left in Confederate hands for roughly a year. Many items were abandoned by the Federals in their retreat, as reported by Maxey: "some $30,000 worth of valuable property, embracing some commissary stores, ordnance stores, quartermaster's stores, clothing, all his tents, 32 horses and 4 mules, a few wagons and ambulances, and some few medicines, and a splendid case of surgical instruments, besides some sutler's stores, a number of officers' trunks, many of the post commander's papers, and some very valuable maps." From the renamed Fort Maxey, Confederate forces moved North through the valley to invade Kentucky.