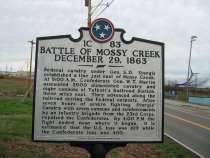 The Federal army attempted an attack on Dandridge and Mossy Creek, but a strong Confederate surge forced the Union line back. The Federals charged headlong into the southern line, wreaking havoc, stopping the Rebel advance.

The engagement at Mossy Creek resulted from a Federal advance of over 6,000 soldiers from Strawberry Plains on December 18, 1863, to pressure the Confederate army of Lieut. Gen. James Longstreet following its repulse at Knoxville. On December 22, the Southern army settled into winter quarters around Russellville, about 30 miles from Strawberry Plains. Longstreet’s cavalry, commanded by William Martin, patrolled a 25-mile arc from Rutledge to Dandridge, centered on Mossy Creek (today’s Jefferson City). Martin kept Longstreet apprised of Federal movements that might threaten the main Confederate army.

Brigadier General Samuel Sturgis and his Federal army arrived in New Market on December 23 and attempted an attack on Dandridge and Mossy Creek but ultimately had to fall back. On December 29, General Sturgis sent Colonel LaGrange toward Dandridge to engage remaining rebel forces there. At 11 a.m., General Martin attacked the Federal line east of Mossy Creek with over 2,000 men and two batteries of artillery. The Confederate army’s strong surge forced the Union line backwards, and at this point, a Southern victory seemed assured. As the Confederates under Brig. Gen. Frank Armstrong attempted to roll up the Federal line from north to south, Campbell ordered one of his cavalry regiments to attack Armstrong’s men. The Federals charged headlong into the southern line, wreaking havoc and stopping the Confederate advance. Over on the Union right, Colonel LaGrange’s men entered the fight after a hasty summons had brought them back from Dandridge. The cavalry charge and arrival of Federal reinforcements convinced General Martin that the time for retreat had come, and he made an orderly withdrawal to his position held before the start of battle. During the evening, the Confederate army fell back to Morristown.

The Federals held their position at Mossy Creek, having inflicted possibly four hundred casualties on the Confederate side compared to over a hundred of their own. Sturgis’s army remained at Mossy Creek until active operations resumed at Dandridge during the middle of January.