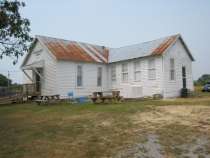 Ancestors of the founders of Promise Land were brought to Dickson County early in the county's settlement as slave labor for farms and for the iron works at Cumberland Furnace. At Promise Land, freedmen were the only residents, creating a world they could control.

First settled by freedmen in the Reconstruction era, the community of Promise Land north of Charlotte in Dickson County sheltered its residents from the Jim Crow South, offering protection from the strife and bigotry surrounding them. At Promise Land, freedmen were the only residents, creating a world they could control.

Ancestors of the founders of Promise Land were brought to Dickson County early in the county's settlement as slave labor for farms and for the iron works at Cumberland Furnace, a major antebellum iron operation. With Emancipation, African Americans in Dickson County left the region in droves, many finding new opportunities in urban areas such as Nashville. The founders of Promise Land, however, chose to stay. They chose Promise Land’s location because it was available and affordable, certainly, but the village was also central to the neighboring, mostly white, communities where they could work.

In 1881, what had been a hamlet of families began to organize as a community when Arch and John Nesbitt donated land for a church and school, forming Promise Land’s new heart. In addition to the community buildings of the school and two churches, Promise Land contained several stores, creating a largely self-contained community.

As was true across the South, residents of Promise Land began leaving the area during the Great Migration of the 1910s, and the flow continued throughout the coming six decades, draining the village of its population. However even as the generations moved away, an annual homecoming became a popular tradition and turned into the Promise Land Community Festival, which occurs the first weekend of June each year and draws visitors from around the nation and even the world. Through these occasions, many residents who had moved away from the village have begun to reinvest in its life, some by returning for the annual visits and others by restoring their families’ properties in preparation of a return. After several decades of negligence, the community has been revitalized by becoming the locus from which networks of kinship spread.