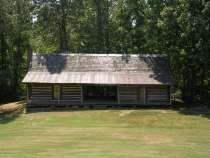 More than 5,000 men, many of them locals, met in a chaotic battle in this narrow lane. Confederates under Col. Frank Armstrong captured Federal cannons and men, but declined to pursue them to Jackson, an important Union supply base.

On Aug. 28, 1862, word came that 10,000 Confederate troops were approaching Jackson with Col. Frank C. Armstrong who, just a year before, had been a Union officer. Armstrong had, in fact, come with 3,000 men, not to take Jackson but to disrupt supply lines and harass Federal troops.

Armstrong’s cavalry skirmished with Federals near Bolivar, then disappeared in the night, capturing railroad guards along the way. At Medon Station, he skirmished with 150 Union soldiers barricaded in a depot until Federal reinforcements arrived by train.

Union Col. Elias Dennis had orders to hurry to Jackson and intercept Armstrong. Early on Sept. 2, Dennis’ advance men ran into Armstrong’s troops on narrow Britton Lane. Believing he was outnumbered and unable to retreat, Dennis made a stand on a rugged ridge line and set up the 20th Illinois to cut off Armstrong’s route.

Armstrong could have escaped. Instead, he mounted a fierce attack, driving the Federals back.

The 7th Tennessee, ordered to charge, dashed through a stripped cornfield under heavy fire. John Milton Hubbard of the 7th wrote, “How so many men got out of that field alive is one of those unaccountable things that sometimes occur in war.”

E.B. McNeil wrote, “Col. Adams, mounted on a beautiful cream-colored mare, well to the front leading his men at racing speed, was a conspicuous target for the enemy, and every moment I expect to see him fall...Those behind, unable to see for the blinding dust…spurred madly forward…only to stumble and fall over their dead and wounded comrades and horses in front until the narrow lane was completely blocked.”

Clearing the way with sawed-off shotguns, Adams’ regiment captured the cannons. Major Warren Shedd formed a line of the weary 20th and 30th Illinois and prevented a rout.

Armstrong’s men had marched 300 miles, fought two battles and three skirmishes and taken 350-400 prisoners in less than 10 days, but they were demoralized by his decision not to pursue the Federals.