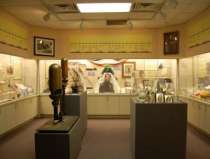 The Farragut Folklife Museum--and the town of Farragut itself--is named in honor of David Farragut, the first admiral of the U.S. Navy, who was born in and grew up in the area. He was commissioned as a midshipman in the U.S. Navy when he was only nine years old. He served in the War of 1812 and had become a prize master by age 12, serving under his adopted father, David Porter. He participated in the capture of the HMS Alert and, at age 12, was assigned to bring a captured ship to port. He helped establish the country’s first naval base in the Pacific and was wounded in an engagement against the British in Chile in 1814. At age 21, he was promoted to the rank of lieutenant for his work against pirates in the West Indies. In 1853, he took on the task of creating and commissioning the Mare Island Navy Yard in San Pablo Bay, California. Although Southern by birth and marriage, Farragut regarded secession as treason and left his home in Norfolk, Va., to live in New York during the Civil War. He served on the Naval Retirement Board until given a special assignment to capture New Orleans. In April 1862, Farragut ran the blockades to capture the city and port of New Orleans and was named the first rear admiral in the U.S. Navy. On Aug. 5, 1864, he attacked the Confederacy’s last major port on the Gulf of Mexico, Mobile Bay. He is memorialized in popular culture for his heroic actions at Mobile Bay where, lashed to the rigging of his flagship, he saw other ships pulling back to avoid naval mines. His cry, "Damn the torpedoes! Full speed ahead," became known throughout the nation. He was promoted to vice admiral and, in 1866, to admiral, and placed in command of the European Squadron. His was one of only six officers in history to be allowed to remain on active duty for life. He is the only naval officer to be honored twice with a postage stamp.