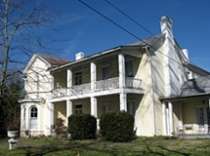 This National Register-listed Victorian dwelling was home to Col. John A. Fite, who raised a company for the Confederate army and served in various Virginia battles. In 1863, he was wounded and captured at Gettysburg. His Civil War memoir detailing his early life, war service, and prison experience is well known. After the war, he returned to his law practice in Carthage and served in several capacities, including a term in the Tennessee General Assembly and as State Adjutant General.