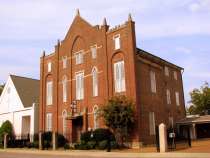 The first three-story building in Tennessee, and once the tallest west of the Alleghenies, the Franklin Masonic Lodge has an interesting history. Called one of the most significant historic buildings in the South by many experts in architecture, it has served as home of Hiram #7 ever since its completion, making it the oldest continuing lodge in the same location in the United States. It was constructed of handmade bricks and funded by the proceeds of the first legal lottery in Tennessee. A unique mixture of country craftsmanship and Gothic tradition,it is one of the oldest Gothic structures still standing in the country. It predates by about 15 years the major thrust of Gothic architecture in the United States, which began around 1840. It mixes the flatness of the Federal Style with Gothic pointed arches, battlements and finials. The building served as the founding hall for many Franklin churches, including first Episcopal Church in Tennessee, the Franklin Church of Christ and Presbyterian Church. President Andrew Jackson met with a delegation of Chickasaw Indians on the steps of the Masonic Hall on August 17, 1830. From that ceremony came a treaty that resulted in the removal of the Chickasaws from their native lands to the West. During the Civil War, the Masonic Hall was used as an observation post by both Union and Confederate forces and later as a hospital for Union soldiers.