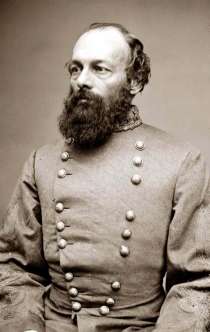 A historical marker shows the line followed by the Army of Tennessee and the site of skirmish. The clearly visible railroad bed was a branch line used by both armies to haul coal from the mines at Tracy City to the main line at Cowan. After July 1863, Confederate guerrillas were often active against this line. Also located in Sewanee is the University of the South, whose founders included Bishop General Leonidas Polk. Also, the All Saints Chapel, a consecrated Episcopal chapel, has a stained glass window depicting Union troops blowing up the University's cornerstone. The gravesite of General Kirby-Smith, Confederate commander in East Tennessee in 1862 and later Commander of the Department of the Trans-Mississippi, as well as several other Confederate graves are located in the Chapel's cemetery. A historical marker is located at Rebel Roost cabin which acted as the university after the destruction by Union forces.