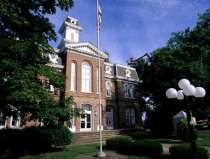 Federal forces occupied the square from 1862 to the end of the war and established a depot garrisoned by as many as 3,000 soldiers. Also, during their Kentucky invasion of 1862, a portion of Gen. Braxton Bragg’s Confederate army used the Carthage river crossing. The current Smith County Courthouse, built at the end of Reconstruction in 1875, is an impressive Second Empire-styled landmark, and a United Daughters of the Confederacy monument stands on the courthouse grounds. Northwest of the square is the City Cemetery, where confederate veterans are buried. To the immediate east of the square is the location of town’s Reconstruction-era African American neighborhood, marked now by the Turner Chapel AME Church and the Mt. Olive Baptist Church. Adjacent to the square is Braden Chapel United Methodist Church, which houses a historic African American congregation.