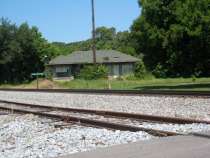 This was an essential east-west railroad route in the Southern Confederacy. After its capture by Federal armies early in 1862. Union commanders established garrisons along its length. To protect the vital railroad junction at Corinth, fortifications were constructed at locations west of Corinth, Garrisons were also established east of Memphis, and at another railroad junction at Grand Junction, TN. Grierson's 1863 Cavalry Raid of the Vicksburg Campaign started from LaGrange.