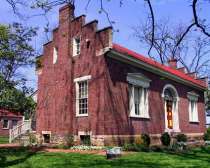 Cotton planter Fountain Branch Carter built this dwelling in 1830. On November 30, 1864, after more than three decades as a peaceful farmhouse, it was at the epicenter of the Battle of Franklin, in the heart of the Union line. Union Gen. Jacob D. Cox had his headquarters here. During the battle, Carter, his family, and two neighboring families took refuge in the basement, where they all survived. A few Federal soldiers, frantic to escape the carnage outside, joined them. Union reinforcements pushed their way through their fleeing comrades and slammed into the Confederates charging this way.