Maryville During the Civil War 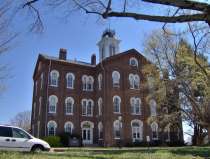 During the antebellum period, Blount County supported abolitionism. In 1822, local Quakers and other residents formed an abolitionist society, and in the decades following, local clergymen preached against the evils of slavery. When the county considered secession in 1861, residents voted to remain with the Union, 1,766 to 414. Fighting directly touched Maryville, the county seat, in August 1864. Confederate Gen. Joseph Wheeler’s cavalrymen attacked a small detachment of the 2nd Tennessee Infantry (U.S.) under Lt. James M. Dorton at the courthouse.