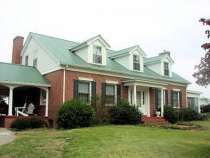 Albert Gallatin Harris purchased this farm in 1829 and built the present house in 1857. After camping on the land during the Civil War, Union troops ransacked the farm, killing or stealing all the livestock. They did not burn the house because the Harris family had cared for a sick Union officer and nursed him back to health. When Union soldiers stole Harris's nine-year old daughter Ada's pony, she angrily shouted after them, "I hope he throws you, and breaks your damn neck!"