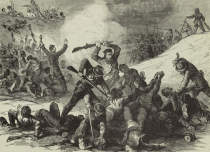 In the summer of 1861, Confederate Gen. Gideon J. Pillow ordered the construction of a fortification here, later named for him. High on a bluff 80 miles above Memphis, Fort Pillow provided a clear view of the river for miles in both directions. It became headquarters of the River Defense Fleet under Capt. James E. Montgomery. Gen. P.G.T. Beauregard ordered it abandoned in May 1862, anticipating the fall of Corinth, Mississippi. Occupied in September by the 52nd Indiana Infantry and later by other Federal units, Fort Pillow became a base to control guerrilla activity in the area and a refuge for local Union supporters and escaped slaves.