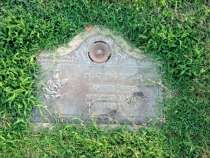 Thousands of Tennessee families were caught in the crossfire of the Civil War. Dempsey Parker's family, which lived in the Hillsdale community here in Macon County, is one of many examples of a family sharply divided between North and South. Parker, a respected elder, had served his country in the War of 1812 and was an ardent Unionist. His son Isaac Newton Parker, however, served in Confederate Lt. Col. James D. Bennett's 7th Tennessee Cavalry. Son Daniel Webster Parker joined Co. H, 5th Kentucky Cavalry (US). Another son, Alfred B. Parker, who did not enlist, was killed in March 1863 by unknown guerrillas.