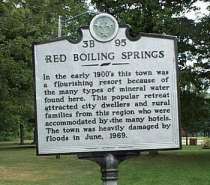 Red Boiling Springs has long been a landmark in Macon County. It was a central crossroads for both Federal and Confederate forces during the Civil War. The war came home for local residents on September 24, 1861, when Capts. Ridley R. West and Joseph L. Bryant organized Co. H, 28th Tennessee Infantry (CS) at the Webb (later the Dedman) Hotel. Webb's Hotel was the only one at the springs, but it was large enough to accommodate the soldiers and officers who passed through the village. On October 22, 1861, Cols. John W. Head and James J. Turner organized the 30th Tennessee Infantry regiment here. Within months, however, many recruits found themselves in a Union prison, after the Confederate defeat and surrender at Fort Donelson.