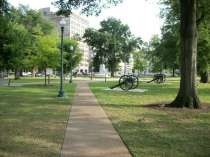 Opened in 1906 as part of the Memphis Park and Parkway System, Confederate Park commemorates the Battle of Memphis. When Confederate forces retreated to Mississippi after the Battle of Shiloh in April 1862, unfortified Memphis became vulnerable to attack. From these bluffs and those at what is now Chickasaw Park, on June 6, 1862, thousands of civilians watched the naval battle on the Mississippi River below. Within 90 minutes, the Union fleet defeated the Confederates. Medical Cadet Charles R. Ellet and a small party entered the city and raised the U.S. flag over the post office. The Federals held Memphis for the rest of the war.