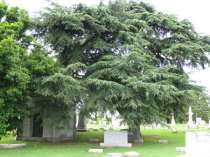 Established in 1852, Elmwood Cemetery is the resting place of some of the most colorful inhabitants of Memphis, including many who were significant during the Civil War and Reconstruction. They include Tennessee Governor Isham G. Harris, who led Tennessee out of the Union in 1861; Confederate General Gideon J. Pillow, namesake of Fort Pillow upriver; African- American millionaire Robert Church, Sr., who survived an attack during the Memphis Riot of 1866; and Shelby Foote, a renowned historian of the war.