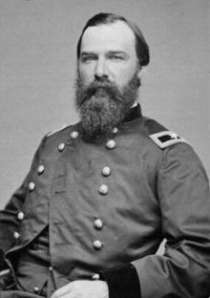 In 1864, just to your left, the Federal army established Camp Gillem to protect the locomotive yard here at Gillem Station. Both were named for Gen. Alvan C. Gillem, commander of the troops guarding and constructing the Nashville and Northwestern Railroad. Gillem (1830-1875) was born in Gainesboro in Jackson County and graduated from the U.S. Military Academy in 1851. He fought against the Seminole Indians and did garrison duty on the Texas frontier. After serving with distinction early in the war, he became colonel of the 10th Tennessee Volunteer Infantry (US) in May 1862. Promoted to brigadier general in August 1863, Gillem then supervised the troops protecting the new military railroad. Camp Gillem and its surrounding fortifications guarded a long trestle that ran through the nearby valley.