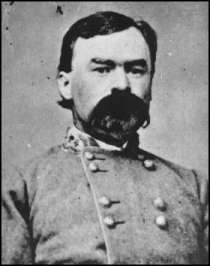 Change of Ownership: Confederate Gen. William Hicks "Billy" Jackson (1835-1903), who acquired Belle Meade Plantation after the war, served with distinction throughout the Western Theater of the Civil War. He was an excellent horseman, a skill that served him well during the war and afterward. He graduated from West Point in 1856 and was sent to fight in the Indian wars in New Mexico territory. In May 1861, he resigned his commission and enrolled as a Confederate artillery captain. In November 1861 at the Battle of Belmont, Missouri, Jackson was aide-de-camp to Gen. Gideon J. Pillow and was wounded in the fighting. After recovering, Jackson in April 1862 was appointed colonel of the 1st Tennessee Cavalry. Before the year ended, he had been promoted to brigadier general.