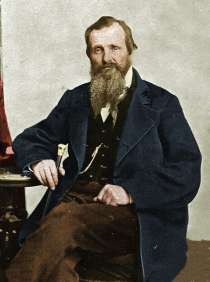 Belle Meade and Union Occupation: William Giles Harding, the owner of Belle Meade Plantation, was an ardent Confederate supporter who provided thousands of dollars to help arm Tennessee's Confederate forces. He served on the state's Military Armaments Committee. In March 1862, he helped Col. Nathan B. Forrest during the evacuation of Nashville by sending 30 wagons of munitions south. After the evacuation, Union commanders soon took control and arrested leading Confederates, such as Harding, who was imprisoned at Fort Mackinaw, Michigan, from April to September 1862. His wife, Elizabeth McGavock Harding, ran the plantation in her husband's absence. That fall she complained bitterly to Military Governor Andrew Johnson about the treatment of the family's plantation: "There has been removed already from this place ... five hundred wagon loads of hay, corn, oats, wheat, etc....The Government has made a requisition upon me for horses for the use of the Cavalry and have taken every suitable horse I had except my carriage horses."