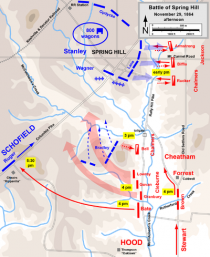 By 3 P.M. on November 29, 1864, Union Gen. John M. Schofield realized that his command was in great danger. The bulk of his army was posted near Columbia, Tennessee, while Confederate Gen. John Bell Hood’s troops were north of him, approaching the Columbia Turnpike near Spring Hill. To prevent being cut off from the rest of the Federal army at Nashville, Schofield moved northward. At about nightfall, the leading elements of his army were approaching Spring Hill. Gen. Thomas H. Ruger’s division led Schofield’s column and soon passed to the north, moving right past the Confederate troops camped here.