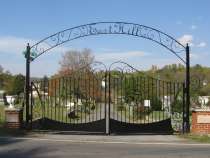 During the Civil War, Bristol was a strategic location on the East Tennessee and Virginia Railroad. The Confederate Medical Corps established hospitals in the town, which soon became an important medical center. Wounded soldiers were brought by rail from battlefields in the region, and those who did not survive were interred on East Hill in a small plot. These 101 burials are concentrated in an area that lies beyond an opening flanked by two heavy stone posts. Almost 200 additional Confederate graves can be found throughout the cemetery. The 16.7-acre East Hill Cemetery is divided by the Tennessee-Virginia state line. The westernmost part is the oldest, with the first burial occurring in 1857. The graveyard was not officially designated a cemetery until 1868, when merchant LaFayette Johnson purchased two acres, including the soldiers’ plot, because he wished to honor those who had died during the war.