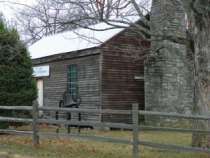 In the summer of 1861, the Cold Spring School was used as a hospital at the second site of the Confederate camp of instruction Camp Trousdale. The schoolhouse is in Richland Park and serves as a museum of local history.

"We found a camp ground surrounded with tombs, wrote Confederate soldier Moses Joseph Nichols from Camp Trousdale in Sumner County. In the summer of 1861, the Cold Spring School house was used as a hospital at the second site of the Confederate camp of instruction Camp Trousdale. Six thousand men encamped on just a few acres, sharing a spring as a water source. The summer heat, open ditch latrines, and drainage of the camping grounds into the water source all combined for a plague of disease. Soldiers from rural communities were at the greatest risk having never been exposed to many of the diseases that befell the camp. Camp command could not curb the rapidity with which the diseases spread. When the hospital tents and improvised hospitals, such as the Cold Spring School, were filled, sick men took refuge in local homes, hospitals in Nashville, or at home on extended furloughs. Some men never recovered. For Middle Tennessee, many of the counties' first war casualties are attributed to these camp diseases. This 1850s building was originally located roughly two miles northeast of Portland, Tennessee where it served as a schoolhouse and church meeting place in addition to its time as a temporary military hospital. The schoolhouse is currently located in Richland Park and serves as a museum focused on local history. It is open on Sundays 1 to 4 PM from June to September and has a small admission fee. Located in front of the building is the Cold Spring School: Site of Camp Trousdale Civil War Trails marker. The marker can be viewed without cost any day of the year.