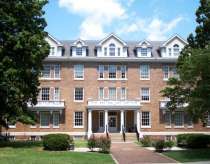 Blount County was a Union stronghold with a history of anti-slavery organizations, and an integrated city government and college. Military action was limited, but one action caused massive damage to Main Street.

Voting 1,766 to 414 against secession, Blount County citizens held a staunch pro-Union stance, and an anti-slavery sentiment pervaded the county well before the start of the war. By 1822, an anti-slavery society was formed, and in the decades following, abolitionist ministers preached the evils of slavery in their sermons. Even Maryville College practiced a non-discrimination policy both prior to and after the Civil War, opening its doors to whites, African Americans, and Native Americans alike. This was brought to the attention of the Freedmen’s Bureau in the postwar years, which donated a total of $16,000 over the course of a few years to the institution. The college was also one of the first in the state to admit women to its program. Maryville’s seven-man city council was comprised of four African American members by 1867. The Freedmen’s Normal Institute, which served to turn freedmen into teachers, was created the same year. Military action in Blount County was limited to skirmishes, raids, and the occasional encampment of a large force, which stripped the land of resources. An 1864 skirmish between Lt. James M. Dorton’s guard [US] and cavalry forces under Gen. Joseph Wheeler [CS] resulted in extensive fire damage to Main Street and structural damage to the courthouse (then located at the intersection of Cusick and Main, now Broadway). The engagement contributed little to the march toward Appomattox, but its impact on Maryville was great. Half of Main Street stood in ruins, and some residents departed, never to return.