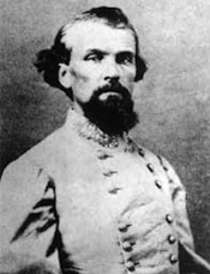 On March 4, Nathan Bedford Forrest’s cavalry under Gen. William H. Jackson collided with a strong Union force, hoping to make up for their defeat at Dover. The drove Union troops back and captured 1200 men.

Following his reverse at Dover, Tennessee, on February 3, 1863, Confederate General Nathan Bedford Forrest reorganized his command and awaited further opportunities for action against the Federals. On March 4, elements of his cavalry under Gen. William H. Jackson collided with a strong Union force at Thompson’s Station north of Spring Hill. Jackson was slowly forced back, and then the bulk of Confederate forces arrived, as did their commander, General Earl Van Dorn and his subordinate, Forrest. Colonel James Coburn, the Union commander, attacked the Confederate left and center at mid-morning the next day and, after a brief success, fell back to their original line. At this juncture, Forrest unlimbered his artillery to suppress any Union cannon fire and worked his way around the Union flank and attacked his rear positions while Van Dorn hit the Federal line from the front. The Union army fought hard against these attacks and drove the Confederates back several times, but Forrest finally succeeded in cracking the Union line after two charges and having his horse shot out from under him. With a final decisive effort, Forrest assaulted the final Union positions and forced Coburn to surrender his men, some of whom the Confederate cavalry chased all the way to Nashville. Forrest’s men fought hard to expunge the defeat at Dover, with the total Confederate force under Van Dorn capturing more than 1200 men. Van Dorn lost 357 killed, wounded, and missing. Forrest praised his officers and men alike, noting that he had “discerned no straggling or shirking from duty on the field.” Forrest returned to camp until called to action at Brentwood on March 24, where he captured another 529 officers and men.