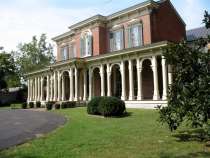 An elegant mansion caught in the crossfire of the Civil War, this nationally registered, historic landmark reflects a time of prosperity in the Old South, as well as the hardships suffered during the Civil War.

On the morning of July 13, 1862, Union Gen. Thomas T. Crittenden’s force at Murfreesboro was separated into three detachments. Col. William Duffield and the 9th Michigan Infantry were camped at Oaklands, Lewis and Rachel Adeline Maney’s house, around Maney’s Spring. An infantry company guarded the courthouse in town, while an infantry regiment, a cavalry unit, and an artillery battery were camped on Stones River more than a mile northwest.

Suddenly, Confederate Col. Nathan Bedford Forrest charged into Murfreesboro, having divided his command to attack all three Federal detachments simultaneously. Part of the Battle of Murfreesboro took place on the front lawn of Oaklands while the Maney children watched from an upstairs window. When the Confederates attacked, a resident wrote, “The whole population were aroused from their slumbers, and rushed to their windows, balconies, and verandas, with every demonstration of delight.” Forrest’s troops soon overpowered the Federals here.

Duffield, wounded during the fighting, stayed at Oaklands, where the Maney family and their slaves cared for him until he had recuperated enough to travel. In mid-December 1862, Confederate President Jefferson Davis and his aide Stephen D. Lee stayed here. Davis reviewed Confederate troops nearby and wrote, “The troops in Murfreesboro were in fine spirits and well supplied.”

In 1872, Lewis Maney filed a war damage claim for $27,000 for the plantation’s losses during the war, but federal authorities rejected it. Evergreen Cemetery, which was part of the Maney plantation, is east of Oaklands. Maney family members are buried there, as well as the Confederate dead.