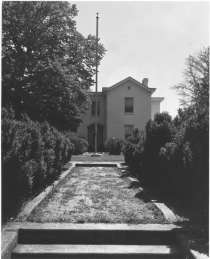 The Tuscan style antebellum mansion was built by slaves between 1854-1858 for its newlywed owners, Robert and Louisa Franklin Armstrong. Period antiques and Museum of CSA.

Bleak House, the home of Robert Houston Armstrong and Louisa Franklin Armstrong, is an Italianate-style mansion completed in 1858. During the Siege and Battle of Knoxville, November 17–December 4, 1863, the house was Confederate Gen. James Longstreet’s headquarters. A sharpshooter unit, “The Elite Twenty,” occupied the house’s second-floor east-facing windows, as well as the tower. They were armed with British Whitworth rifles, accurate to about 1,500 yards. On November 18, when the Federal line was 750 yards east of the house, Union Gen. Williams P. Sanders ordered Lt. Samuel Benjamin in Fort Loudon to put a cannon shot through the Bleak House tower to dislodge the sharpshooters. Called “the Prettiest Shot of the War” by the Federals, it hit the second floor of the house at its southeast corner, killing three of the sharpshooters. Their pencil portraits are on the tower’s interior north wall. That afternoon, Sanders was mortally wounded, reputedly by a sharpshooter, after watching Capt. Stephen Winthrop rally the Confederates. Federal officials renamed Fort Loudon in honor of Sanders. During the fighting, Mrs. Armstrong and her daughters were confined to an upstairs bedroom for their safety. A sentry was instructed not to allow them downstairs without permission. Mrs. Armstrong once defied the sentry, and when she refused to return upstairs, he fired a warning shot into the stairway, where the .58 caliber minie ball remains today. On December 4, Longstreet left Bleak House, a place riddled with many bullet holes, as well as a shell scar in the main parlor.