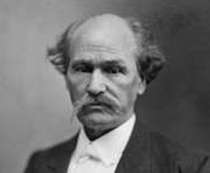 Within the walls of this magnificent Greek Revival-style capitol, designed by famed American architect William Strickland, a Confederate governor and a Federal military governor each administered the state during the Civil War. Governor Isham G. Harris, of Memphis, supported Tennessee secession. From his office, he plotted strategy and planned a military alliance with the Confederacy. He told the legislature in January 1861, "The systematic, wanton, and long continued agitation of the slavery question, with the actual and threatened aggressions of the Northern States and a portion of their people, upon the well-defined constitutional rights of the Southern citizen...have produced a crisis." The first secession vote failed. After a second vote in June succeeded, Harris led the state into the Confederacy and helped raise 120,000 volunteers for its armies.