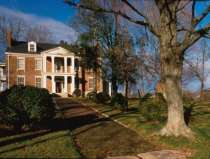 In the spring of 1866, the bodies of Confederate soldiers killed at the Battle of Franklin were exhumed from their temporary graves and reburied here, on this two-acre plot adjacent to Carnton, home of John and Carrie McGavock. Over about ten weeks, veteran George W. Cuppett led four men who reinterred the remains of 1,481 Southern soldiers. In addition, the body of Cuppett\'s younger brother, Marcellus Cuppett, who died during the period, was also buried here, the only civilian.