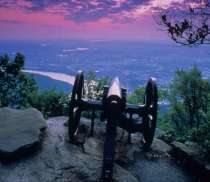 Key portions of the battlefield are preserved and interpreted at the Chickamauga-Chattanooga National Military Park, with interpretive sites at several locations.

The battle of Chickamauga (September 19-20, 1863) developed from the struggle to control the strategic railroad town of Chattanooga, gateway to the Deep South. In the summer of 1863 Major General William S. Rosecrans, commander of the Union's Army of the Cumberland, successfully forced Braxton Bragg's Army of Tennessee to retreat first from Middle Tennessee and then from Chattanooga.

The two sides finally met in battle along the banks of Chickamauga Creek, a name translated as "River of Death." The Union army numbered approximately 58,000 men, while the Confederates mustered some 66,000 troops. Although very few tactical gains were made in the first day by either side, on the second day a misunderstanding at Federal headquarters led to a weakness in their lines, and the Union army was forced to flee back to Chattanooga in a virtual rout.

The tactical triumph at Chickamauga cost the Army of Tennessee 18,000 casualties; the Union suffered16,000 casualties. With Chattanooga still in Union hands, however, the victory at Chickamauga held little strategic meaning. Within a few days Bragg's army laid siege to Chattanooga, this time confronting the new Union commander Major General Ulysses S. Grant, who had replaced the humiliated Rosecrans.

By late November the Union forces in and around Chattanooga numbered almost 70,000, but the Confederates had depleted their fighting strength to about 40,000 after sending Longstreet to Knoxville.

Outnumbered and plagued by tension within the leadership, the Confederate siege fell during the Union attacks on November 23-25, and Bragg’s troops were forced back to North Georgia. Each side suffered about 6,000 casualties, and Bragg resigned his command, while Grant secured his position as a Union general.

Key portions of the battlefield are preserved and interpreted at the Chickamauga-Chattanooga National Military Park, which maintains its visitor center in Georgia but preserves and interprets several key aspects of the battles, including Missionary Ridge and on Lookout Mountain.