Battle of the Cedars Blockhouse #7 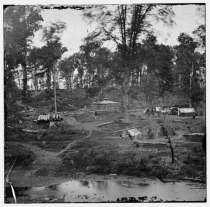 During John Bell Hood’s advance on Nashville, a larger skirmish occurred on December 4, 1864, when Confederate forces under William Bate (of Nathan Bedford Forrest’s command) attacked Federal Blockhouse #7. Bate had already captured several blockhouses north of #7, which protected the railroad bridge over Overall Creek north of Murfreesboro. On Dec. 4, the 13th Indiana Cavalry set out from Murfreesboro and set up a skirmish line on the south bank of Overall Creek to watch the Confederates and impede their advance, if possible. The commander of the 13th Indiana, Colonel G.M.L. Johnson, sent for reinforcements from Murfreesboro. The commander at Fortress Rosecrans in Murfreesboro, General Rousseau, quickly dispatched Major General R. H. Milroy and two regiments of infantry to bolster Johnson’s cavalry at Overall Creek. Milroy arrived in the late afternoon, posting the 8th Minnesota east of the Thomas Hord house and the 174th Ohio brigade to the west, facing the creek. Skirmishes occurred all along the front between the Hord house and the creek to the north. When Milroy sent Johnson to attack the Confederate left, southern artillery opened up to disperse the cavalrymen with severe loss. The 174th Ohio then attacked and collapsed the Confederate right, which barely stabilized with the arrival of fresh troops. Milroy finally realized that he faced a strong infantry force, and retired back to Fortress Rosecrans in Murfreesboro. Blockhouse #7 held out for two weeks and was never captured by Confederate forces. General Forrest subsequently passed down the Nashville Pike to raid Murfreesboro on Dec. 7. General Milroy, at the head of another flying column from Fortress Rosecrans, broke the rebel line and forced Forrest to retire from the field. On Dec. 15, Hood retreated from Nashville to end his Tennessee campaign.